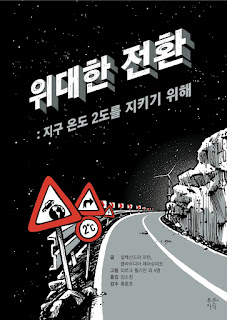 Update 9 Jan 2016: We now found out about the details of the Korean version of our book:

Translated by Google Translater, this turns out:
Mince the "low carbon society" alternativesLast Christmas, celebrated Christmas in the summer, such as around the globe. In Washington, even those who jog in shorts and cherry blossoms bloomed stood out.Experts from the early 2016's third strongest ever 'super El Nino "has predicted that the rampant buril. Climate change is intensifying and is still an important issue can not be avoided if no one lives there on the planet.12 days last month in Paris, France opened the UN Climate Change Convention Conference of the Parties (COP21) 'Paris Convention' has been concluded. 195 countries are keeping the global average temperature rise within the 2 degree rise in industrialization era before 2100 and would agree to limit future temperature increase to below 1.5 degrees.Thus this book easy and fun lecture format associated with climate change in a concrete alternative to the time required to reduce carbon emissions was published for each country.Great Transition: to keep global temperatures 2 degrees' is a graphic book is easy and fun to embellish released a lecture format gyeotdeuleo a wealth of illustrations and graphic practical alternative to prevent climate change.Political science, economics, oceanography, geology, such as how the global environmental change experts and the German Advisory Committee of nine academics from various fields to tackle climate change in the technical, economic and proposes specifically in the national side.The complex subject of climate change Even readers familiar and compressed without background knowledge to deal with popular language can easily understand the contents.The book containing the energy powerhouse of the German scholar's voice is directly in contact with the concrete alternative provides opportunities for climate issues and the latest low-carbon society by one to the reader./ Mingyeonghwa reporters mkh @